We often heard the term demand in your life and used it many times. But what does it refer to? Have you ever wondered about what is demanded in economics and how it influences the business world?

Don’t worry. You are at the right place. In this article, we are going to discuss the demand in economics and some of its related laws.

So let’s dive into the article below to find out your answer.

In economics, demand for a commodity refers to the quantity of the commodity that an individual consumer or a household is willing to purchase per unit of time at a particular time.

Demand is a concept that everyone should be familiar with both the business and the customer as it makes sense and occurs practically every day.

3.       Sufficient purchasing power in his possession to buy the product. 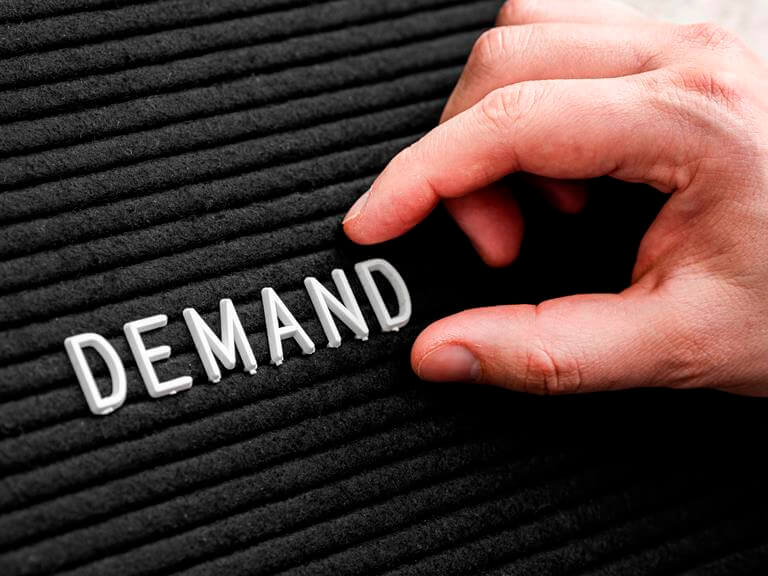 When a commodity is demanded by the consumer itself is known as individual demand.

For example- demand for footwear, and clothes.

For example- Demand for a plot, refrigerator

When we consider the demand for a commodity by all the individuals and households in the market together, it is referred to as the market demand or aggregate demand.

Sometimes certain factors determine the demand for a product and those factors are referred to as the determinants of demand.

The important determinants of demand are as follows.

4.       Tastes and preferences of individuals

The law of demand states that the higher the price, the lower the quantity demanded, and vice versa, while other things remain constant.

Thus, it describes that given the process of the related goods, income, tastes, and preferences of the consumer, if the price of the good increases its quantity demanded decreases,

while if the price of the product or service decreases its quantity demanded increases.

When the price of a good decrease it becomes relatively cheaper. So this good is substituted in the place of the now relatively costlier good. Further, since one of the goods in the consumption bundle has become cheaper, the consumer is now left with some purchasing power.

With this purchasing power, he can buy more additional bundles of things in his consumption bundle. Thus, when the substitution and real income effects of price changes are taken together, it may be seen that the fall in the price of a good increases its quantity demanded and a rise in its price reduces its quantity demand and here the law of demand satisfies.

The graphical representation of the law of demand is known as the demand curve. The demand curve shows the maximum amount of goods that the consumer would be willing to buy at each possible price of the good, under given conditions of demand.

So the demand curve can show the maximum price which an individual consumer or a household is willing to pay for different amounts of goods.

Each point on the market demand curve shows the maximum amount of the goods that all consumers have taken together would be willing to buy at each possible price of the goods under given conditions of demand.

The curve of demand always slopes downward from the left to the right side. There are several reasons for that,

4.                Substitution effects like a fall in the price of a good while the prices of its substituent remain unchanged, will make it attractive to the buyer who will demand more of it.

Exceptions to the law of demand

Generally, the amount demanded of a good increases with a decrease in the price of the good and vice versa. However, in some cases, the law of demand may not be true and can’t be applied.

The exceptions are as follows

3.       Expectations of change in the price of the commodity

The elasticity of demand refers to the percentage change in quantity demanded caused by a one percent change in the demand determinant under consideration, while other determinants are held constant.

The elasticity of demand can be measured by the following formula:

The larger the value of this elasticity, the more responsive the quantity demanded to changes in the determinants under consideration. If we look at the demand function, we can notice that certain determinants of demand are completely beyond the control of the firm.

The firm can’t possibly make any significant difference to the average annual income of the consumers, the number of consumers, or the prices of the related goods.

Difference between demand and supply

So basically demand is the buyer’s desire and ability to make a purchase of a product or service but supply is the quantity of a product that is available to the consumers.

As you have learned this far, you might have got an idea about demand and how it works along with its basic elements. It might clear all your problems and strengthens your entire concept in this subject of demand.